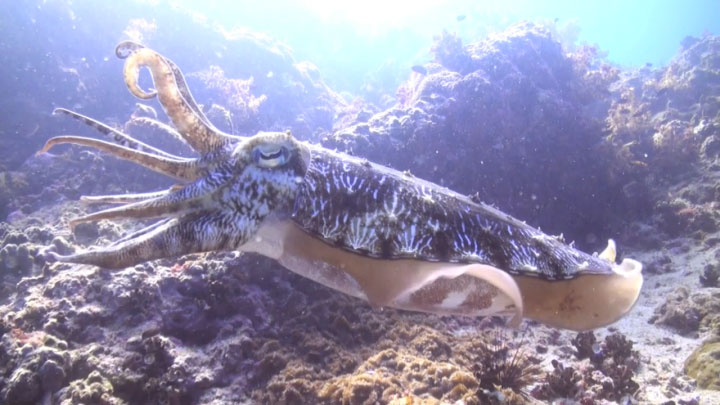 Cuttlefish are considered to have the highest intelligence of any invertebrate. They can learn complex distinctions in their environment, and even teach other cuttlefish what they’ve learnt, just by observation.

This is a male cuttlefish, presenting its tentacles in an aggressive manner, warding off any potential competition.

This is the Giant Australian Cuttlefish. For three whole months, males present a dazzling visual display. Even disregarding the threat of predators. Their goal is to win over a female cuttlefish, who are notoriously picky.

Rival males become aggressive with one another, flaring out the web membrane between their tentacles and turning vivid colours. Then, they circle one another, copying each others movements. There may be up to 20 males contesting for one female.

Female cuttlefish are far more likely to mate with 'cross-dressing' males, rather than males that aren't so clever.

Females choosing the intelligent male's sperm over the ones who weren't cross-dressing suggests that intelligence is regarded as an attractive trait to have.